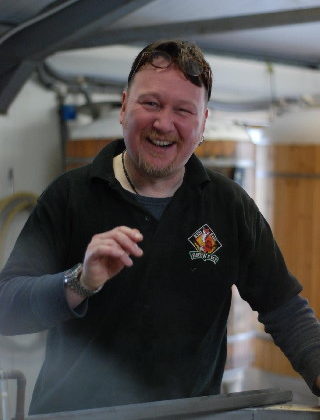 Owner, Head Brewer and Chief Sweeper-Upper, Russ Barnes is a true beer aficionado. Having learnt his trade at one of Essex’s oldest breweries, he wanted to try out his own ideas and recipes, so he decided to start his own brewery and get back to the traditional roots of good beer with no additives or preservatives and all brewed by hand. In his spare time, Russ restores classic cars and is an avid musician. He can often be seen around and about in a little red MG, or in one of the local pubs with his many guitars or mandolins.

Russ doesn’t have a favourite brew, he just loves beer (and gin)!

Moose joined CAMRA when still a teenager, and has been an enthusiastic and, he alleges, discerning ale drinker ever since.
He performs numerous duties at the brewery, including cask cleaning and sterilising, racking the ales, brewing, drayman, sales, site cleanliness and safety, and occasionally offering opinions and advice, even when not requested.
Very little gives him as much satisfaction as seeing our excellent ales being properly-presented in top-class “wet” pubs, and hearing the comments of the happy customers and landlords. In his other life, he is a keen singer of traditional folk songs, performing across the country and in many countries overseas, and might even be persuaded to bash out some karaoke-style numbers, if the time is right. His greatest (only) claim to fame is that he once took part in “Countdown” and won ten rounds, before losing in the grand final. He prefers the darker, maltier brews, but has no particular favourite – although, if pushed, might plump for Arctic Fox.”
If you want to know why he’s called Moose you’ll have to ask him!

Fiona started out labelling bottles, and now handles a variety of things from the cask register (tracing where all the beer goes and comes from) to running the bottling machines. Fiona is now also Red Fox’s admin and keeps the brewery on the straight and narrow as far as the VAT is concerned.

Jeremey handles the day-to-day design and maintenance of almost all of the online communication – check out both the Red_ Fox_Brewery  and Copper_and_Cask Instagram or the Facebook page for regular updates on products.